Welcome to Soviet Sunday comrade! Each week's Sunday we do what communists do best: share. Each and every week at about this time'ish there will be a new picture featuring art from adventure game called
Bunker.

On a serious note though: making a game is hard work. Everything starts from making up shit. Then you do shitty concepts and feel false contentment. You continue working night and day, draw finalized pictures until it's time to present your child to general public. Then that bastard (who is hard boiled because he works at the army) tells you that your finalized graphics are piece of shit and you return to square one or sometimes to triangle of three. You start whole painstakingly horrible process from the very beginning. And you cry, you cry without control and feel self contempt. Eating a muffin or couple hundred helps. 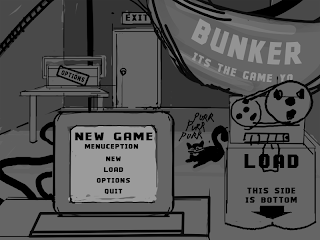 Somewhere between the immeasurable amount of work you do you find yourself thinking that is everything worth it. Do all indie game designers feel like this? Are their bastard child just as bad as yours? Are you even an indie designer? What makes an indie designer? Being independent or being a designer? Gah, why do they force us to choose like this?! 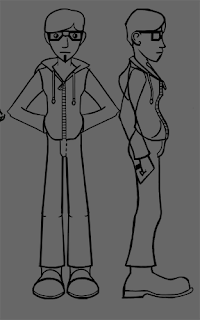 Once you've worked on the project long enough you tend to lose the vision, you keep forgetting things. Like which of the pictures you have already posted on Soviet Sundays and then you get the inevitable double post. That's when your world crumbles and people of the internets hate machine take over you. You just feel like canceling Fez 3, but you can't. For one there is no such a game and for third you have just traveled too far to back up. Besides you don't have hard drive to do such a thing, the back up.

But sooner or later you start thinking what's more important in life. You start taking back those tired hours, days and months, even years you sacrificed just to ship the game. And less you stress better quality you do and then the game finally gets released on some never before heard shitty website and then you die because of all those muffins you ate earlier.

See you again tomorrow (if tomorrow is Soviet Sunday).